This has been a difficult first four months of the year for investors. There’s no shortage of factors contributing to market weakness including: high inflation, Central Banks around the world raising interest rates to fight this inflation, the Russian invasion of Ukraine, an upcoming midterm US election and potentially slowing global growth. As of April 30th, this has been the 3rd worst start to a year ever for the S&P 500.

The good news is that usually when markets have a weak start to the year, the rest of the year tends to perform much better than average.

Check out the table below. After April, the S&P 500 has historically averaged a 4.8% return. When looking at the 10 worst starts to a year though, that average return jumps to 10.0% for the remainder of the year. 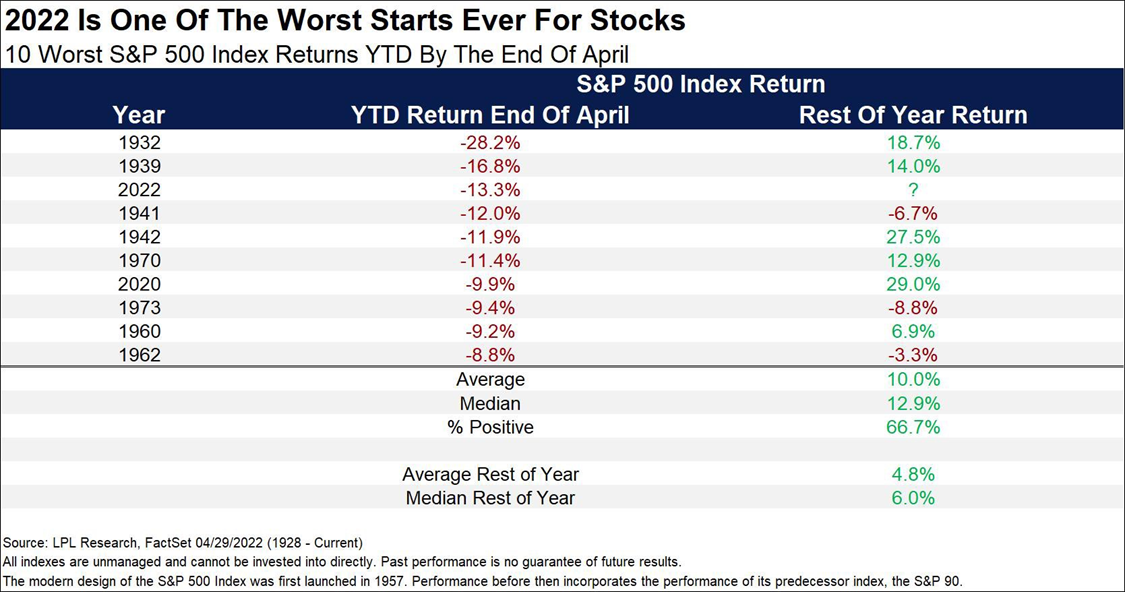 There have been pockets of strength, but they tend to be in defensive sectors such as Consumer Staples, Health Care, Telecom, and Utilities. Companies in these sectors are benefitting from either defensive-type businesses or high dividend yields. Other sectors of note that have had a good start to the year are materials and energy stocks, which are benefitting from supply shortages and increased demand in an inflationary environment.

Adding to investors’ frustrations is that this is the first period of high inflation many have had to deal with in their investing lifetime. The last time we had a similar inflationary backdrop was the 1970s. This was a key driver of the poor returns for fixed income investors. When in the past fixed income would typically (at least partially) offset equity weakness, the Canadian bond universe posted its worst quarterly performance ever in Q1 with a 7.0% decline and the selloff continued through April. The longer the duration (the time remaining until maturity) the worse the fixed income investment will perform in a rising rate environment. 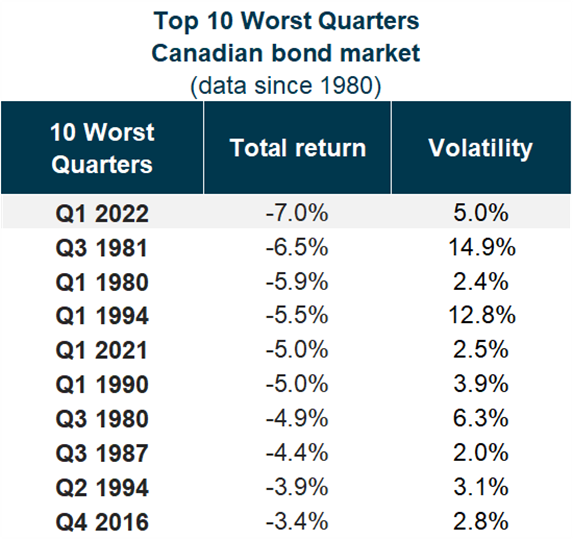 Three years ago, we had magazine covers asking if inflation was dead, such as on BusinessWeek magazine below. Two years ago, many thought we were going into a prolonged economic downturn. Now many believe the Fed has failed to act in a timely, meaningful way and that runaway inflation is here to stay.

Markets are driven more by what participants think vs. hard data, which usually has a lag to it. We don’t know exactly when inflation will begin to cool off but the point of “peak inflation” will only be known in hindsight (and there’s a possibility we’ve already seen it). 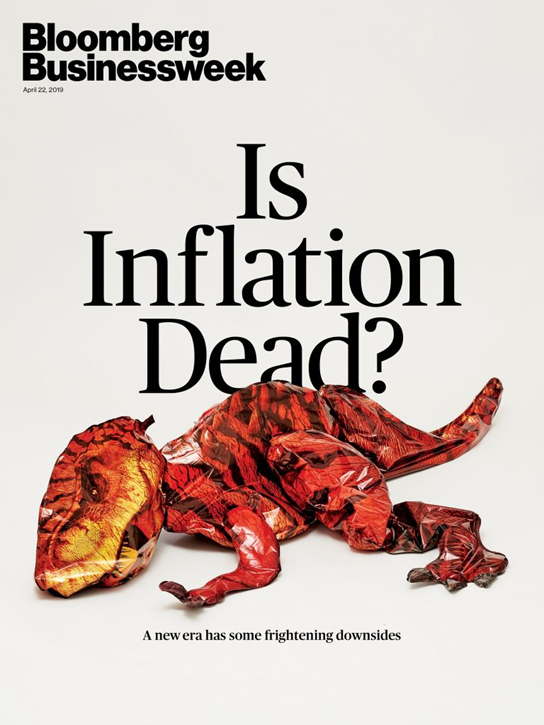 The above explains how markets are forward-looking and typically will price in events 6-9 months (or more) in advance. At some point markets will begin to refocus on the next event and, while we don’t know exactly what that is today, it could be a positive step-change.

What we do know is that a shift will occur and patient investors will be rewarded, just as they have been after every signification selloff in the past.

But that does not mean the road to that point will be easy or without worry.

We do caution that trying to time that change, selling now and attempting to buy back at lower price on a later date, is a very difficult proposition for even the world's best investors. It would mean having the fortitude to buy back when things appear worse than they are now.

During times of market stress such as these, investors should resist the strong urge to make changes to a portfolio based on what has already happened. Instead, investors would be much better served by staying focused on sticking to their investment objectives which represent the best way to achieve their long-term goals. Always remember, the challenge of holding during market volatility is the fee you pay for the reward of earning higher long-term returns.

Returns are never free. They demand you pay a price, like any other product. And since market returns can be not just great but sensational over time, the fee is high. Declines, crashes, panics, manias, recessions, depressions. – Morgan Housel, Fees vs. Fines