Investors have been concerned about the market after the first half of the year which saw both stocks and bonds fall. A typical U.S. balanced portfolio of 60% stocks and 40% bonds had the worst start to a year ever with a return of -10% for the first 6 months. The good news is that following those previous periods of underperformance, a 60/40 portfolio has performed very well over the next 6 months, with an average return of 10%. (Source: The Market is Bouncing)

Over the last ~6 weeks, investors have gone from asking whether we are in a recession to whether we are in a new bull market. It’s a reminder that a lot can change in a short period. Since the lows in June, the Nasdaq Index is up 20%. Many stocks have performed even better, just like on the downside when many individual stocks underperformed the index. There was no bell ringing or alarm to signal the lows were in. And we still don’t know if THE lows have been reached.

But the answer to both of the above questions comes back to having an investment plan, that will guide you through both good and bad markets. We won’t know until many months down the road whether the lows have been reached. So, it is not at all helpful to investors to know that news. The markets are a leading indicator, discounting future earnings and events that have not yet occurred!

It is not hard to get caught up in the emotions of the market, especially when there is a deluge of negative news. This year there has been a cascading period of headlines that can drive investors to panic as it seems things will continue to get worse. Eventually though, we reach a level where stocks become oversold. The news does not change on a dime though. Good news tends to happen slowly and stocks respond in kind, as investors anticipate future positive events, albeit over a longer timeframe.

The market has not necessarily recovered on good news, but ‘less bad news’. Investors were too negative on recession odds while corporate earnings have turned out to be better than expectations, with the worse fears for many companies overdone. A good example of this is Netflix reporting they lost 972,000 subscribers in the 2nd quarter. Some forecasts had them losing twice this number. The stock, while still well off its highs, has rallied more than 50% from its lows on news that is getting better – and not worse!

Investors also underestimated sentiment, which got very bearish. The market tends to fool the majority. People got very negative, especially in June. There is not one measure of sentiment but several sentiment indicators all showed extreme levels of pessimism. A couple of examples, the AAII Bull-Bear Ratio shows that people were more bearish over the last few months than during the pandemic!

Another example was the Bank of America Fund Manager survey of 259 fund managers, responsible for over $700 Billion in investments taken during the week of July 8-15. The monthly survey showed that optimism about global growth fell to a record low, dropping below levels documented in the immediate aftermath of the collapse of Lehman Brothers in 2008. The share of respondents who said a recession was “likely” was the highest since April 2020, during the early stages of the coronavirus pandemic. As a result, equity allocations had fallen to levels last seen during the 2008 global financial crisis and cash positions had increased to the highest levels in nearly 2 decades!

The charts below highlight how these funds were positioned, many underweight stocks and carrying high levels of cash. This brings to mind Warren Buffett’s famous quote “Be fearful when others are greedy, and greedy when others are fearful.” The tough part is knowing when that period is when living through that ‘fear’ in real time as there were many ‘fearful’ moments in the first half of 2022 for investors. 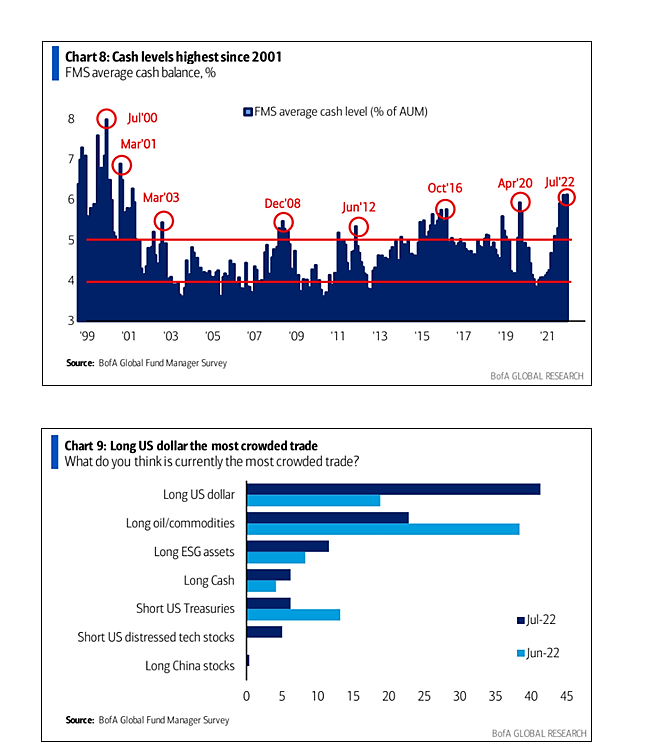 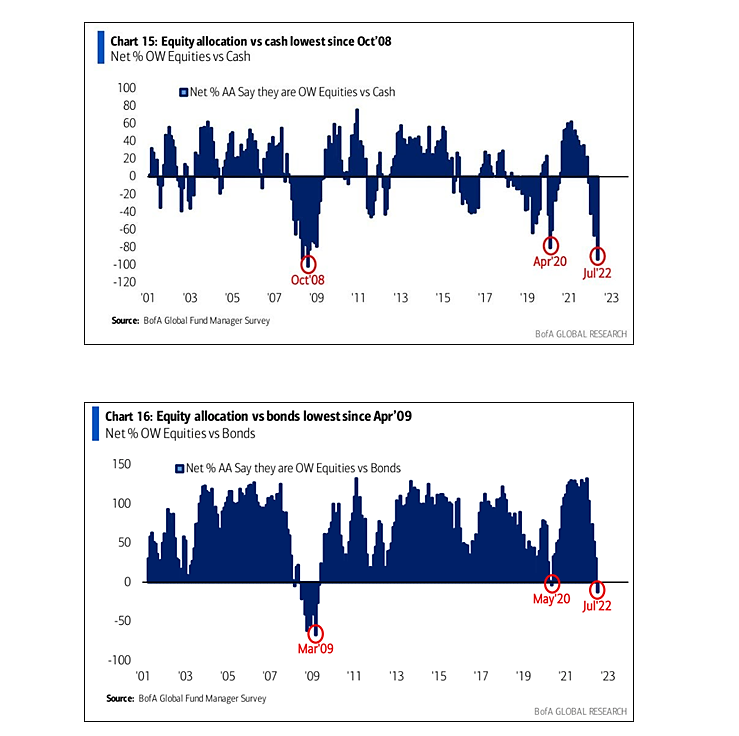 More on this topic: Wall Street confidence in stock market sinks to lowest level in 5 years.

Last Friday’s US Unemployment report which showed the US economy adding 528,000 jobs in July, was more than twice the 250,000 consensus number expected. This highlights both the difficulty and challenge in forecasting economic data but also that the economy is not as dire as some forecasts were expecting. Corporate earnings drive share prices and there have been many recent examples of companies beating lowered expectations. The S&P 500 is on track to show a record quarterly profit in Q2. While investors had been discounting the 2nd half growth in 2023, the recent market strength is indicating investors may have been too negative on trough earnings for many companies. The path from here will likely depend on whether the Fed responds to forward-looking inflation indicators that suggest that inflation is already heading down. The key will be the level of moderation and how that affects their tightening plans or not.

Both stock and bond markets have a way to go. That said, long-term rates of return are more important to investors but sometimes that means living through weaker returns in the short term. There will always be periods where markets correct. An investor who capitulates and moves to cash or gets too defensive in a bear market will have a difficult time recovering after missing a big move in the markets. There is no market signal (certainly not one in June) that markets were going to turn around as they have.

This year we have seen the markets wrestle with some big questions: geopolitics and war in Europe, inflation, and recession concerns. It’s never easy for an investor to ride the market emotions and the media coverage is so negative. But making wholesale changes based on emotions when markets go through corrections, is rarely a good decision. Now is a better time than the summer to re-evaluate portfolios. If an investor was comfortable riding out the market downside and benefiting from the recent upside, that is the price of admission to markets.

What's the Bull Case?: “One of the most common mistakes that investors make is being too bearish. Sure, people get burned using leverage, but mostly the opposite is true. People hold too much cash or sell on the way down or something like this. Unfortunately, we’re predisposed to be cautious. We’re more likely to believe a scary story than an optimistic one. Bad things happen all the time, and it’s easy to get caught up in a cycle of bad and getting worse. But if you want to be a successful investor and a happier person, you need to break free from the shackles of pessimism. Things get better over time, even if you don’t see progress every day.”

‘Great for landlords, horrible for renters': How a runaway rental market has become Toronto's latest housing nightmare: We have traded a hot housing market for a hot rental market.

When is a Bear Market Over?: "There have been far fewer bull markets than corrections or bear markets over time. But those bull markets tend to last much longer and the gains more than outweigh the losses over time. This is the beauty of investing in the stock market — losses are baked into the long-term returns. A lot of this feels like semantics. It’s like arguing about the definition of a recession or inflation — does it really matter? Probably not that much if you’re a long-term investor who expects gains, losses, corrections, crashes, volatility and everything in-between.”