Earlier this week, legendary value investor Jeremy Grantham, co-founder and strategist of a $118B firm, wrote a quarterly piece suggesting that the markets are heading for trouble. Grantham’s view is that the Fed is painted into a corner by inflation and must dramatically reduce financial system liquidity by raising rates and reducing its balance sheet.

While this got a lot of attention, forecasts of market bubbles are not that uncommon: 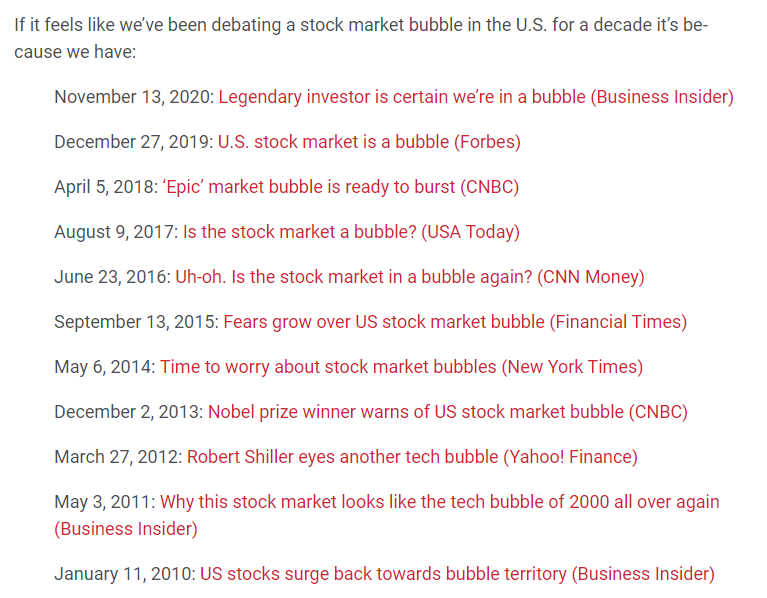 Source: Markets That Are Definitely NOT In a Bubble - A Wealth of Common Sense

I am a long-time Grantham fan and have read many of his papers. Recently, he has taken a step back as he has gotten older and does not write as often as he once did. He’s also quite the ‘gentleman’ to hear him speak with his English accent.

A couple of objections I have with his argument is that, if we had a 20% bear market that caused a recession that would solve the inflation problem pretty quickly. The Fed would then be free to adopt a much more dovish stance. Things do not happen in a vacuum.

I also think that many underestimate the Fed and its multiple policy tools as well as the ability to be flexible, should the outlook change. Which is not in any way a reason to be complacent or that they can’t make a policy mistake. It’s just that there are a lot of perma-Fed bears, who have disagreed with the FOMC and their actions, for a long time.

My other objection lies with his track record, which has been quite poor at forecasting. I believe that if someone is interviewed, there should be better disclosure on some of their past calls, for transparency. It would help to provide some context since no forecaster will ever be 100% correct.

He’s written several times since about a market bubble. Of course, this does not mean he won’t be right this time, but I do think the context of his opinions matters – his timing of the Fed and a market bubble has not been good.

It is the key reason that one has to stick to their investment plan and not be swayed by any one individual’s forecast. Additionally, timing the market is very difficult. Getting both the ‘get out of the market’ call and ‘get back into the market’, at lower prices, is next to impossible for the majority of investors.

My other thought is that if Grantham had come out with a bullish note, predicting that equity markets would have a great year, would that not also be a reason for an investor to change their investment strategy? While it’s important to read both bullish/bearish opinions on the market, one has to stick with their individual investment plan. There is no shortage of opinions and one can easily get swayed by a persuasive view. Markets are not constant and there are always new variables to consider.

We also know that the bearish viewpoint always sounds more sophisticated than the bullish view, even though the Bears have tended to be more wrong than right. I used to keep track of all of David Rosenberg’s prognostications and forecasts. He’s very sharp, well-spoken and well researched – but he’s has gotten many things wrong over the years, which is rarely mentioned.

While it is never enjoyable to experience a selloff, for many investors with a long-term investment time horizon, they should be embraced. Selloffs represent an opportunity for savers to buy securities at a lower price, which is what most investors want. The point of investing is not to buy ‘at the lows’, which we only know in hindsight anyway, but rather the only reason you get high returns over the long run is that you occasionally experience losses in the short run.

In 2021, the S&P 500 did not have more than a 5.2% drawdown from the highs, which is very unusual to see. As of today’s close, the S&P 500 is now down 6.6% off its highs. The Nasdaq is now down over 10% in January and Small Cap stocks are down nearly 18%. I would already consider the Nasdaq in a bear market with so many technology and biotech stocks down more than 20%, the latest being Netflix after reporting their year-end results on Friday.

Indexes will usually have at least one 10% selloff during a year, and in a year where we are going to see central banks start to raise rates, I believe one should expect to see more of a ‘normal’ year with a broader selloff in the main indices. Of course, the timing is difficult to know and few were expecting one over the last month or so. 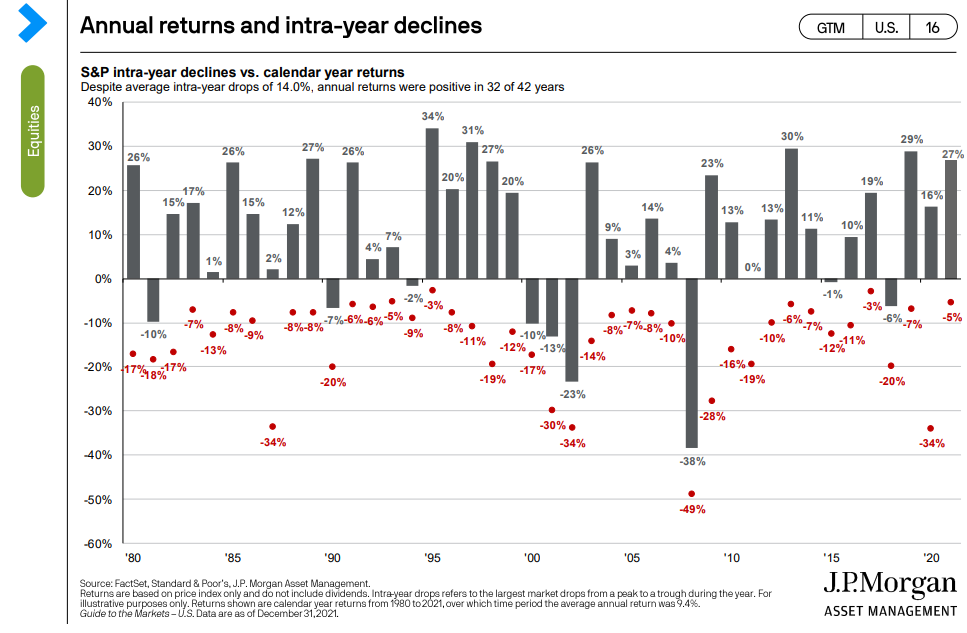 Source: J.P. Morgan Asset Management Guide To The Markets. As of December 31st 2021.

For our portfolios to shift more defensively, it would be a result of our Equity Action Call indicator, from SIA Charts, moving lower from its current favored zone. This indicator is not meant to time every correction, but rather highlight when the risk/reward is potentially no longer favorable for equities, or the possibility of a deeper selloff might occur.

The indicator ranks seven asset classes (US Equity, Canadian Equity, International Equity, Cash, Bond, Currency and, Commodities). When equities move lower and bonds/cash move higher, that’s when we see changes in this indicator. The last time it was unfavored was from mid-March 2020 until the last week of April 2020. When that occurs, it means no new buys in our Baskets and we would be more aggressive selling weaker holdings. When it goes neutral, it means we won’t be adding new securities to the portfolio and we move to more of a defensive positioning.

Why has the market been choppy of late? While many potential factors drive markets, including geopolitics (Russia/Ukraine, a current hot spot), there may be a growing concern about the Fed’s aggressiveness in raising rates this year. While many are expecting three to four rate hikes at a measured pace, the Fed Funds Futures are pricing in a 69% chance of the FOMC raising interest rates 4 - 6 times in 2022. That, in a nutshell, is why equities are having a rough time. A Fed ready to become as hawkish as the bond market is already indicating (hawkish = leaning toward increasing interest rates) is also one that will aggressively move to shrink its balance sheet (by reducing their monthly bond purchases that have kept interest rates low since Covid took hold in 2020). A simultaneous rate liftoff and balance sheet reduction have no historical precedent. Markets are shooting first and asking questions later.

As a reminder, the average drawdown from peak-to-trough in a given year in the U.S. stock market going back to 1928 is -16.3%. As you can see in the chart below, two-thirds of the time there has been a double-digit selloff. 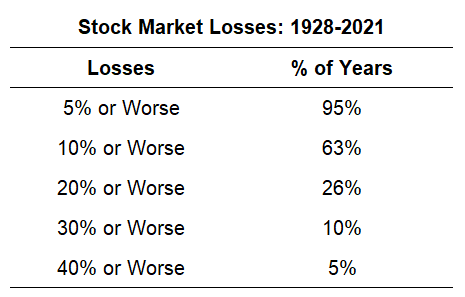 Source: How Often Should You Expect a Stock Market Correction? – A Wealth of Common Sense

These averages are skewed a little higher because of the number of crashes throughout the 1930s, but even in more modern times, stock market losses are a regular occurrence.

As far as how long this correction lasts, the truth is we don’t know. If history is any guide, there is a higher probability this is simply a regular correction as opposed to the end of the world. But it will still be unnerving, nonetheless.

The key is to have a portfolio that takes corrections and deeper market selloffs into account with your investment plan. The investment goal is to have a saving and investing process that is durable enough to handle both up and down markets.

I’ve included another legendary investor’s memo, "Selling Out" written by Howard Marks. Warren Buffett once said about Marks, "When I see memos from Howard Marks in my mail, they're the first thing I open and read. I always learn something, and that goes double for his book." Marks is the co-founder and co-chairman of Oaktree Capital, the largest distressed debt investor in the world. The firm is now owned by Brookfield Asset Management. It is a great note on things to consider when selling a position. Buying gets a lot more of an investor’s focus, but ‘when to sell’ is often the more difficult decision.